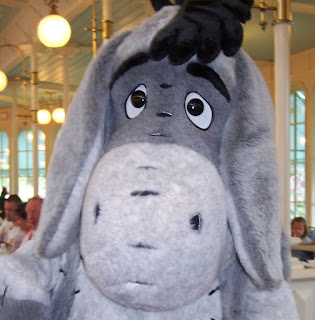 Eeyore is Winnie the Pooh's eternally depressed friend. But to meet guests he leaves behind his raincloud.

He can be found at the Crystal Palace character meal in the Magic Kingdom.

At Disneyland, he can be found in Critter Country with Pooh and Tigger, or as a possible character at the Plaza Inn character breakfast.

Also will sometimes do one letter then give up.