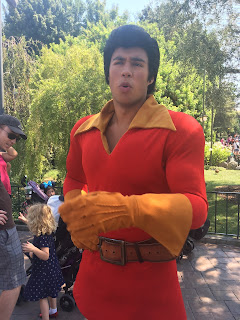 The Disney Villians, when they are in the parks are often some of the most popular characters, but they often don't last as long as characters like the princesses. But rarely they stage a comeback. That was the case with Gaston.

Gaston is the strongman from Belle's village, willing to do anything and everything to marry her, including killing the Beast. 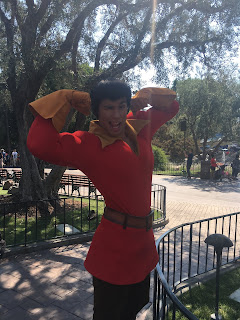 He had been removed from both the Magic Kingdom and Disneyland but has since returned to both parks.

At the Magic Kingdom, he came back with New Fantasyland when there was a new Beauty and the Beast section added to the park. He now meets regularly near his tavern. 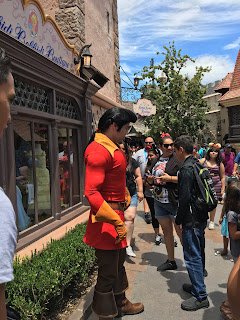 Later at Disneyland, he returned to the park with the live action remake. He began wandering Fantasyland and has continued to ever since. Sometimes he signs Autographs, sometimes he doesn't, but if you want one be sure to ask as there is no telling whether or not he is that day.

If your feeling athletic challenge him to a push-up competition.