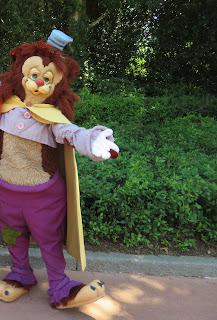 Pinocchio is one of the most beloved Disney films. It was the second animated feature made by Disney and features many of the most recognizable characters in the Disney catalog.

But not all of the characters from the film attained the level of fame that Jiminy Cricket, the Blue Fairy, and Pinocchio achieved.

One of these less famous characters is Gideon. He along with Honest John convinced Pinocchio to join Stromboli to become an actor, and in the early days of the Disney parks, he was a popular character. Nowadays with so many successful films, he is no longer as popular. But he has not completely left the parks.

He can still be found occasionally roaming Disneyland throughout Fantasyland along with Honest John or rarely other Pinocchio characters.

He can also occasionally be found randomly in the World Showcase in Epcot at Disney World.

It is difficult but he can be found. Not only that, he is one of few Disney villains that can be found year round.