The Many Adventures of Winnie the Pooh is a Disney classic and has permanently found its way into every Disney Resort worldwide (ok maybe not Shanghai for much longer). For the history of the Disney Parks, some of the most popular meetable characters have been the Winnie the Pooh characters. But not all of them are as easy to find as the bear himself. 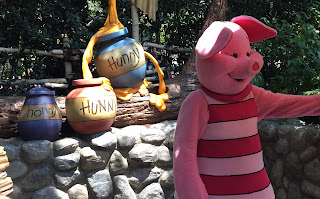 Piglet is Pooh's shy friend and as such is not as common as some of the other Pooh characters. At the Magic Kingdom, you can always find him at the Crystal Palace character meal. This meal is all Winnie the Pooh themed and is your best bet at finding him at any Disney Park. It is also pretty much the only place to find him at Disney Word.

At Disneyland, he is a semi-rare character at the Plaza Inn Character Breakfast. This is by no means a guarantee that you will find him there, but he is not as rare as some other characters that could potentially be found here.

He can also sometimes replace Pooh, Tigger, or Eeyore at the Pooh meet and greet in Critter Country. If this happens it will show up on the app usually about an hour before it happens and he will take one of the three regularly scheduled character's spots. This is not a daily occurrence but it is fairly common for Piglet or Rabbit (or even more rarely both) to show up there.

Dresses up special for Halloween