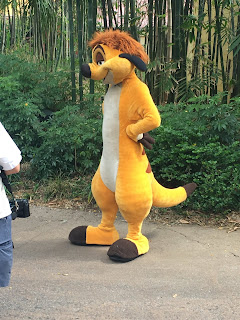 There are relatively few meetable characters from The Lion King around the Disney Parks. Luckily one of them still has a regular meet and greet character in Disney World.

Timon regularly meets guests on Discovery Island at Animal Kingdom. He is even found on the Disney World app. He was brought in as a temporary character and was so popular he became permanent.

If you really want to find Lion King characters at the Disneyland Resort you should try Minnie's Breakfast in the Park at the Plaza Inn. Rafiki is almost always found there and it is really the only Lion King thing left in the parks.