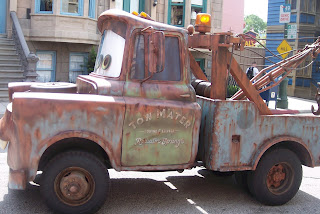 Tow Mater was a fan favorite side character in the original Cars and the central character of its first sequel. He was also one of the original two meetable characters from the series.

He would drive into the park before stopping to allow guests to take photos with him.

He used to meet in the Streets of America at Disney's Hollywood Studios, but the entire land no longer exists.

He currently is one of four rotating characters at the Cozy Cone character location in Cars Land, along with Lightning McQueen, Cruz Ramirez, and Red.