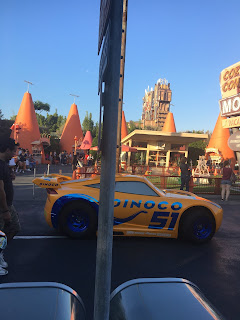 Cars 3 really didn't have that much of an impact on the Disney Parks, except giving us a new meetable Car in the US Disney Parks.

Cruz Ramirez is the new racer introduced in the third film in the Cars franchise and becomes the new face of Dinoco following the events of the film.

She is determined and wins a Piston Cup in her first race ever, and is happy to meet any of her fans in the Disney Parks